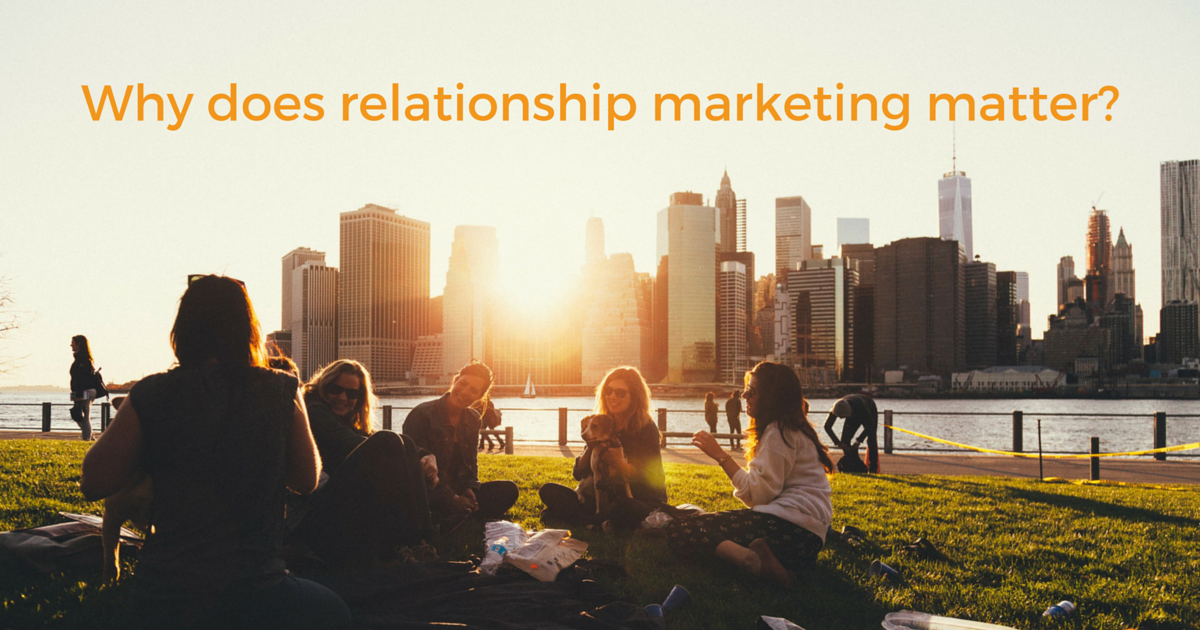 Whether it’s meeting people for the first time, expanding your sphere of influence, or deepening relationships, Twitter is a must. Inevitably when someone asks me how I met “so-and-so,” the answer is “Twitter.”

But you use Slack, you say. Slack’s great. We’re lovers of Slack. Here’s the thing, Slack is an insider tool. It’s not where you meet people. It’s where you invite people you already trust. Twitter is instead open, public, a little less controlled. It’s where the fun is at!

When it comes to marketing products, you can’t just build it and they will come. That’s not a strategy. Over the last year I’ve frequently heard WordPress users ask the following two questions:

“How do I know which plugin to buy?”

“How do I market the plugin I just built?”

Just like in any business-to-business venture, decisions are made because of relationships. We think we make rational decisions when purchasing. Instead, our decisions come from loyalty, which comes from emotions.

How many talks have you heard this year giving you permission to fire a client? Why does this matter? Because we work with people we like.

This is why loyalty matters. Loyalty doesn’t come out of thin air; it’s built over time through relationships.

WordCamps and Meetups: A great place to deepen or start relationships.

In the WordPress space, we have many opportunities to meet people in person — at meetups and WordCamps. Unlike most industries that have one or maybe two trade shows a year, there is a WordCamp happening somewhere nearly every weekend. Go to WordCamp Central and find one.

WordCamps are valuable as an attendee. You’ll never get more value for $40 than to attend a WordCamp, talk to people, shake hands, and exchange Twitter handles. Believe me.

An even better way to deepen relationships is to volunteer, sponsor, or apply to speak. Working for a common goal is a great way to build relationships.

In-between WordCamps are WordPress meetups. Search meetup.com for a meeting near you. Bring your laptop, a notebook, and an open mind. Say hello and introduce yourself.

Meetups are a great source of learning, things to tweet, and people to meet.

How does WordCamp help me network?

Follow the WordCamp hashtag before the event. Read their tweets. Say hi. During the event, tweet that you’re there. Take a selfie with your new friends.

Having a blast with my #WordPress friends at #WCUS pic.twitter.com/pJwKBliXfJ

Go to the after party. Talk to people at lunch. Ask the person next to you in a session a question (but not during the talk).

Put those people on a Twitter List (more about that later) and engage with them after the event. You may see them at the next WordCamp — who knows?

Recently, we got a this tweet. Mason James — Founder and CEO of valet.io, and close friend of ours — said he didn’t know we built WP Rollback, even though he had already read Matt’s recent post about using it to beta test.

Matt is part of our brand. His post reinforced who we are in relationship to this plugin. We wrote about WP Rollback in a different way, not just a product release page, and we received a great tweet.

Had no idea WP-Rollback was @WordImpress https://t.co/JCZfsCmdUp Great article. Killer plugin. Save yourself some hair-pulling, check it out

We all have our super fans, so when brand awareness reaches the third or fourth circle, that’s a good thing. We do need to use Twitter to promote our products and services. This is okay, I promise.

If you’re using Twitter to expand your reach, then your audience should be continually growing. There will be people who don’t know about your older products. Talk about them. It’s a good thing.

The point is, that there is a lot of building in the WordPress space, but not a lot of telling.

WordCamp talks or meetups are often full of recommendations. If someone’s giving you, your company, or your product a shoutout, by all means, tweet it.

"Absolutely don't use anything else than @GiveWP for online donations" @natewilldo at #wclv pic.twitter.com/YGUrw6uP7D

The more we meet people, exchange a few tweets, meet in person, etc. the more we will build a reciprocal trust. Out of that trust a relationship emerges. The WordPress community is known for being collaborative but it’s also growing. In the building there is volume, so let people know who you are and what you do.

[bctt tweet=”Are you using Twitter to talk to people? Why not?”]

Every blue screen and channel built to be less distracting than others (cough *slack* cough) is vying for our attention these days. So, how can you both increase your time online for marketing purposes and still build awesome things?

The secret is in the replies.

Did someone tweet the arrival of their first child? Don’t just press retweet, reply and say congratulations.

Did you read that a friend completed a major project today? Tweet them out a high five.

These micro-conversations have potential for serendipitous moments.

Just as an aside, before you start following people, be sure your profile, cover photo, avatar, bio, location, and website are full and complete.

Take an extra five minutes and figure out what categories of people are important to you (relevant to your branding) and make Twitter lists. Generally lists include geographic regions (San Diego), team members, and topics (plugins, devs, startups) related to your industry.

People are notified of the list you add them to so be aware of that. If “Awesome WordPress Peeps” fits your branding then do it. “Rock Stars of Twitter” works, too. You can make private lists but public lists are more strategic. If they get notified and like the name of the list, they may come back and take a look at your profile.

You can see some of our lists here.

If you’re a business with clients, you’ll want to list them and read, reply, and/or retweet their tweets. That helps keep you top of mind with them, especially if they’re recurring customers.

Twitter lists allow you filter out people. You can follow everyone back and not look like a jerk and still spend the most time with your target audience. I feel a bit like a evil mastermind for saying it, but we’re all in business to make money, right? That hasn’t changed.

Lists are easily viewed as a column in your favorite social media tool (mine is Hootsuite). This functionality allows you to optimize for time and purpose.

[bctt tweet=”Twitter lists allow you to optimize how you spend your time and with whom.”]

So the idea is that you can optimize your time on Twitter by only reading the tweets of those most important to you. It could be important because of an upcoming event, customer tweets, or your fellow WordCamp organizers or company team mates.

You can’t understand an audience unless you hear them speak. People tweet all day long telling you more about themselves than they probably realize.

It’s no secret that we do business with people we know, like, and trust. We’re all agreed on that now, right?

Being a cliche doesn’t make it less true. Think about it. Do a personal inventory.

Who do you like? If someone asked you to refer them to a developer, who would you choose? Is it a friend?

Twitter gets a bad wrap for being nonsense in the way that Seinfeld was a “show about nothing.” The reason it resonated with people is this: we don’t need to solve the middle east crisis, we just want someone to laugh at our story about what our cat did this morning, high five us when we get good news, and say ‘that sucks’ when our computer dies mid project.

We are humans. We are wired for connection. We crave it. No, we need it.

Twitter is a conversation platform. Start relevant conversations (maybe not that you made yourself a cup of tea) and watch what happens.

It’s hard to start from scratch. Maybe last month was the first time you made a commit or pull request on GitHub. But now you have a fancy new plugin. How do you tell people it’s on the repo?

You decided to freelance and break the cubicle chains. So how do you get clients?

Unless you’re Seth Godin or someone who built your influence apart from or before social media, your Twitter feed should not be another RSS dump. We give the Seth Godins of this world a pass on being social because they bring us value. We do not give that same pass to others.

[bctt tweet=”Twitter allows you to go beyond the media in social media — building relationships with people.”]

Go beyond the media in social media. Sure there are a handful of plugins that will format your posts to appear on social media, plugins to automatically tweet your content, and awesome share buttons, but when content is a dime a dozen you have to go beyond just putting it out there.

We’re in a war for eyeballs, people. Everyone and their mom has a blog. There are thousands of amazing writers who can change your life overnight. What is our differentiating factor? How do we rise above the volume?

Twitter’s real power is in relationships.

People don’t read. They scan. This also applies to Twitter.

This is how it works, my friends.

I double-dog-dare you to try this just two weeks. If you’re feeling brave add another five to ten minutes in the middle of the day. Then watch your analytics.

I’m willing to wager that you’ll be happier with your results — I have a full money-back guarantee.