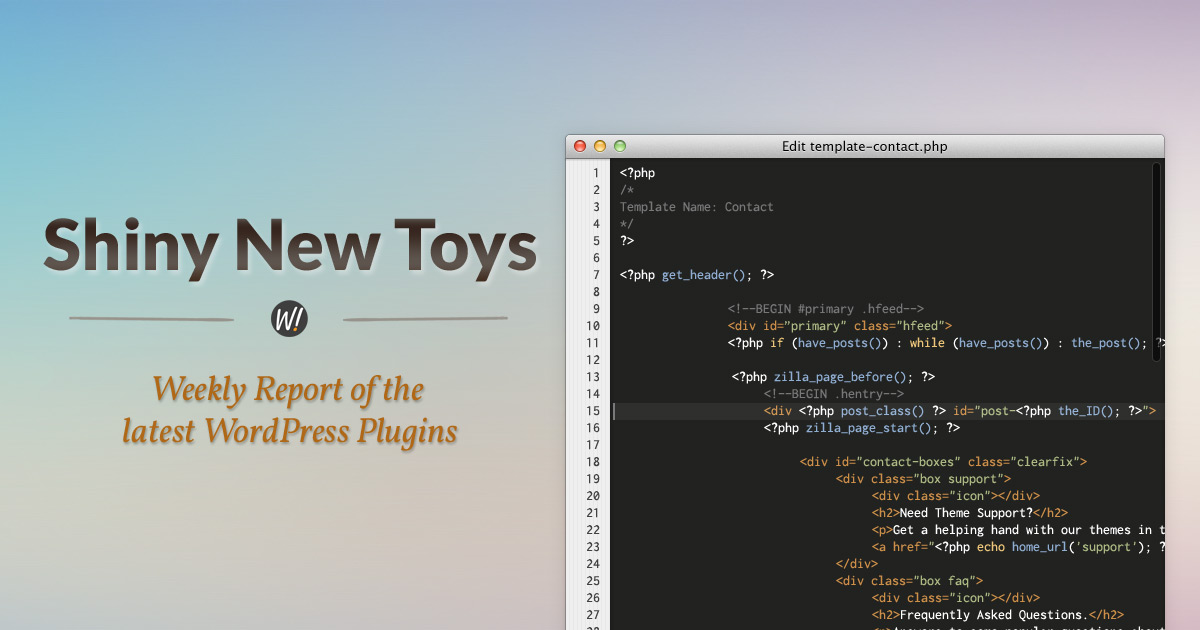 Each week, I browse the latest new plugins on the WordPress Plugin Directory and share my thoughts on the ones that stick out. Some are great, others not so much. Either way, it’s an interesting way to look at the evolution of WordPress as a platform and the Open Source community in general.

This week there’s some interesting developments in SEO, Social, and what I’d personally call the “Shiny New Toys” plugin.

Checking In on Previous Weeks

This is the fourth installment of Shiny New Toys (I know! Already!?). So I wanted to give a quick glimpse of the past 4 weeks and how some of the plugins I’ve covered are fairing so far. This is just a quick list of the most popular plugins I covered from each week and any progress they’ve made so far.

OK, let’s take these toys for a ride!

I really like the idea of “Easy Sell“. It’s kind of like our own QuickCheckout, or the reason we built Give. Basically, you want your visitors to be able to give you money as quickly and as easily as possible. You don’t want to hassle with a cart, or adding tons of products, you just have an eBook or a custom T-Shirt that you want to get out there. So, Easy Sell, right?

Unfortunately, no. It falls really flat for several reasons:

So this plugin is a good idea — not a WooCommerce killer or anything — but it’s way below par for basic implementation. Here’s what this author needs to do:

Really, those simple changes would make this infinitely more useful. There’s definitely more polish that can go into it, and I’m certain this author built this for reason I have no idea about and didn’t ask for my opinion. But I do this kind of thing for a living, and there’s plenty of reasons (like the story of Andrew Angell making tons of money on a free plugin) for even this plugin author to take his code seriously and step it up.

This looks like a really powerful new plugin — IF you are into BuddyPress. Basically, it’s pitched as the best way to give your BuddyPress members the ability to have their own Photo/Audio/Video galleries associated with their accounts. That’s a powerful feature. You can check-out their announcement post as well.

Out of the box I had issues with uploading images — it threw errors about the image format which was incorrect.

While I think there’s issues to work out still, the potential for this plugin is pretty significant. Until this past year, BuddyPress was the defacto social-network-ish plugin for WordPress. That is until Peepso entered the scene. See below on that. So I don’t have detailed feedback for this plugin at the moment, I’d just advise folks to keep tabs on it, it could become very useful this year.

I grabbed this because I thought it might be a Yoast competitor (lots of room for competition in that space still folks!). But it turns out this it more like an email marketing tool. There’s some polish to it, so it seems like the authors are serious about their work, but so far I’m not very satisfied. It looks like something we might even like to use on GiveWP.com or WordImpress.com but here’s a few reasons why I’m not excited yet:

While I don’t have a lot of positive things to say about this plugin currently, my hope is that we can revisit it in a couple months and it’ll be drastically improved. It seems like a tool that could be very valuable, but just needs the right attention to detail and clear and useful marketing.

Now isn’t this just about perfect!? They should have called this plugin the “Shiny New Toys” plugin. It adds a “New” tab to the “Add New Plugins” screen so you can show all the newest plugins right there in your WordPress dashboard. Makes my life even easier for these posts!

Seriously, is the author of this plugin a reader and busted this out just for me!? Thanks!

OK, this is not a NEW plugin. But I’m not cheating… I promise. Peepso came out Summer of 2015 with a big bang! The makers of a popular Joomla plugin, called JomSocial, wanted to do a WordPress version. They reached out to a friend of ours, Dave Jesch at SpectrOMtech and created Peepso. They got some really great initial reviews and several strong write-ups from the community.

Peepso is a freemium plugin and uses the Add-on model, but as bundled Add-ons similar to Gravity Forms. Their current list of premium Addons is impressive, and I think their pricing is very generous.

So it caught my eye when I noticed not one, but three free Peepso plugins on the Plugin Directory that were released within this past week. Each of them authored by Dave and the Peepso team. Here they are:

Overall, Peepso really looks like a formidable product, it’s well developed by one of the best WordPress developers we know personally, and their business model is sound. Highly recommended if you’re looking to create a self-hosted online community of any sort.

Like last week, I came down a bit hard on some of these plugins. I don’t regret it though. Personally, I wish before I launched my first plugin on the repo that someone would have grabbed my keyboard from me and said “Think before you commit, Matt!”. It’s relatively easy to get published on the Plugin Directory. Really… it’s not that hard. But it’s hard to actually create a product worth owning and being proud of. Do your homework, stay current with the latest code in WordPress (like the REST API), know what else is already out there, and only commit the best most awesome code you can possibly produce.

See you next week!