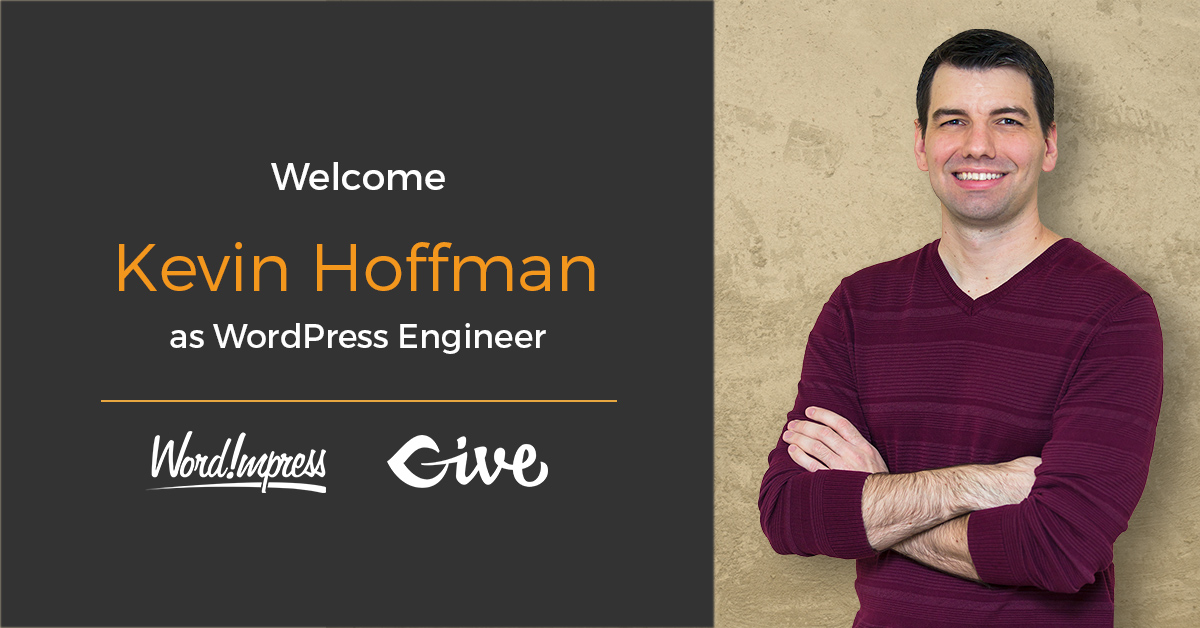 Kevin Hoffman joined the WordImpress team as a WordPress Engineer this past fall. We asked him some questions about code, Open Source, and life. We hope that when you read this post, you’ll love him as much as we do.

Question 1: When did you first become interested in code and programming?

For most of my life, coding was a means to an end. As a youngster, I was always more interested in the end result, whether that was video games, 3D animation, or eventually, websites. I loved the element of interaction, and I understood that in order to create it, I had to learn how to code.

Over time, I developed a passion for coding itself, due mainly to the problem-solving nature of the work. While my internal designer-developer makeup has shifted over the years, I try not to stray too far in either direction as I believe a foundation in one field makes me stronger in the other.

Question 2: How did you come across WordPress?

I developed my first WordPress site as a student at Drexel University in 2006. An English professor discovered that I had an interest in design and computers and asked me to come on board at the student-run online journal. I began by designing graphics for articles (or “featured images” as we know them today) and within a couple of years I was redesigning the entire site in WordPress.

Even back then I was developing custom themes based on my own designs, mostly because I didn’t know there was another option! Looking back, I’m kind of glad I did since diving into code is what led me to where I am today.

Question 3: What inspires you about Open Source?

While I developed my first WordPress site back in 2006, it wasn’t until about 2014 that I discovered there was such a thing as a WordPress community. Easily the thing that inspires me most is the selfless nature of everyone who is willing to give back.

My first real interaction with the community was through the Advanced WordPress Facebook group. Since joining, I’ve spent countless hours giving and receiving help and just observing the work shared by others. It’s also where I first met Matt and Devin, so I owe a lot to that group.

Question 4: What problem was the most difficult to solve?

My biggest struggle is internal. I’ve always been a researcher, a planner, a thinker. I have this need to convince myself that I’ve considered all possibilities and this is the best way forward. The reality is sometimes you just gotta sit down and do it. I’m working on it 🙂

Question 5: What do you hope to accomplish this year?

I’m looking forward to putting some things on the record this year. I’ve never had a problem sharing experiences or offering advice in one-on-one conversation, but the impostor syndrome always kicks in when I start writing things down.

I’ve learned so much from the work shared by other WordPress developers over the years, so I’d really like to make 2017 the year when I start giving back in a more permanent way. That means less thinking and more doing across the board.

Question 6: What are your favorite non-screen hobbies?

I’m really fortunate to be able to work for WordImpress from my home office in Pittsburgh, which is where I was born and raised.

Not long ago my brother, sister, and I were spread out in cities across the East Coast with my parents back home in Pittsburgh. Now we’re all back within driving distance of each other, and I’m a proud uncle of two–soon to be three–beautiful nieces. Spending time with them is my favorite hobby.

Every now and then I get to do some teaching of my own. For the last few years, I’ve taught an Hour of Code at the local elementary schools. It’s challenging, rewarding, and something I hope to do more of in the future.

Question 7: What is your favorite book or movie?

Good Will Hunting – There’s a theme of unlocked potential that resonated with me since the first time I saw it. I’m also a sucker for a good monologue and Robin Williams in the park scene is up there with the best of all time.

Question 8: Quotes to live by?

“By idolizing those whom we honor, we do a disservice both to them and to ourselves. By exalting the accomplishments of Martin Luther King Jr. into a legendary tale that is annually told, we fail to recognize his humanity, his personal and public struggles, that are similar to yours and mine. By idolizing those whom we honor, we fail to realize that we could go and do likewise.” – Charles Willie

In our line of work, where we are surrounded by and depend upon the accomplishments of others, it’s easy to convince ourselves that we’re not capable or worthy of doing likewise. We allow plugin sales, or Twitter followers, or 5-star ratings to define the person, and in doing so, we fail to realize that even the most successful among us deal with the same struggles as the rest of humanity.

What I love most about this quote is the sense of obligation and responsibility that it makes me feel, especially towards the WordPress community. It’s important that we honor those who have laid the foundation for our success, but it’s equally important that we go forth and attempt to do the same. I am so proud to be part of a team that makes that attempt every day.