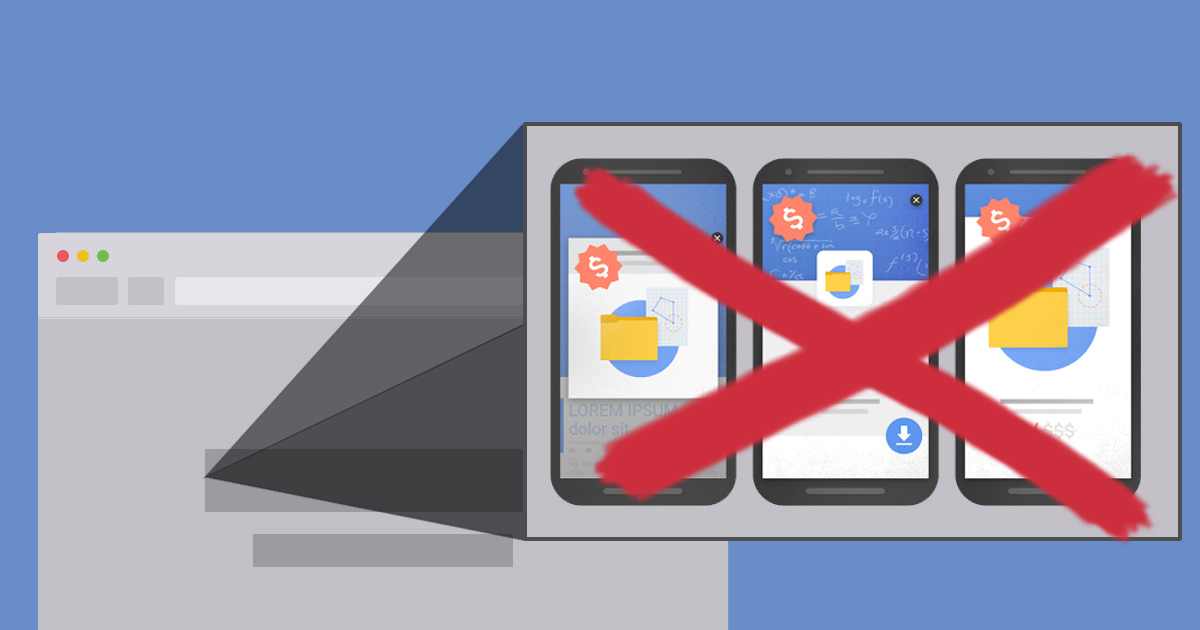 Google is flexing its muscles again, leveraging its dominance in the search engine market to push its own idea of what website best practice looks like. They announced that popup “interstitials” will make your site have less relevance if they appear on mobile devices.

In April of 2015, Google tweaked their search algorithm to make sites that were not mobile responsive have less relevant results on their search engine. Back then, I wrote this piece:

If you don’t know what Mobilegeddon is, you’re already doomed

I was heavily in favor of the move at that time. It seemed pretty obvious that sites that weren’t mobile responsive simply weren’t paying attention. This move I’m also in favor of, but it definitely feels a lot more in the realm of Google pushing their agenda rather than being some benevolent protector of the web.

Here’s the gist of it:

“Pages that show intrusive interstitials provide a poorer experience to users than other pages where content is immediately accessible. This can be problematic on mobile devices where screens are often smaller. To improve the mobile search experience, after January 10, 2017, pages where content is not easily accessible to a user on the transition from the mobile search results may not rank as highly.”
~ Almighty Google

There’s a couple important caveats to this:

More importantly to the majority of WordPress users, they seem to purposely NOT mention the very popular Exit Intent popups. These only display when a user indicates (usually only on desktop where the mouse cursor leaves the browser screen) that the user is intending to go somewhere else.

These were made amazingly popular by the research and products of Syed Balkhi, specifically his OptinMonster product. I reached out to Balkhi on Twitter to get his initial reactions.

this in my opinion is really to target against interstitial ads like Forbes and other "media" sites have.

He also affirmed that popups can be problematic when used badly.

popups have a bad rep because most people don't use it right –> Why Popups Suck –> https://t.co/rGSxUTzpxV (Good read)

Balkhi is a really smart guy, and knows his market and his product inside and out. He’s obviously not worried by this news at all — in fact he might even be embracing it. The more educated users are about best practices with popups, the more likely they will be to chose his product.

Nevertheless, there are several features of OptinMonster that I think might be a little problematic after this new algorithm rolls out:

My Gripe with Popups

I’ve read the articles that say “They just work!” including Balkhi’s. I’ve seen the numbers. But I’ve also been extremely annoyed by them — especially on mobile devices.

I do believe that Exit Intent is the best way to do popups constructively — that’s what we use on our GiveWP.com site. But I personally prefer what many call “scroll-triggered boxes” or slide-ins. These are like drawers that roll up discreetly towards the bottom or top of your screen once you get close to the end of an article. In Balkhi’s list above, that’s “scroll %”. They don’t obstruct the content, they are animated to get the right kind of attention, and are easily dismissable.

On my personal site I use Boxzilla by ibericode for my scroll-triggered boxes. I also pinged founder Danny Van Kooten. Here’s his reaction:

Oh wow, I like this! From the looks of it, a small cornered box won't affect anything. 🙂

I haven’t done the research myself yet, but I have a sinking suspicion that those who subscribe via a popup — even an exit intent popup — are less likely to remain a loyal subscriber than those who seek out that subscribe box. When people say “they just work”, I ask “For how long? And what’s their open rate?”

Bottom line is that Google will be “search shaming” your pages if your mobile users can’t see your content easily. Start adjusting now before “Popocalypse” comes in January 2017.

7 thoughts on “Google Plans to Punish Popups, Balkhi and Van Kooten are Not Concerned”