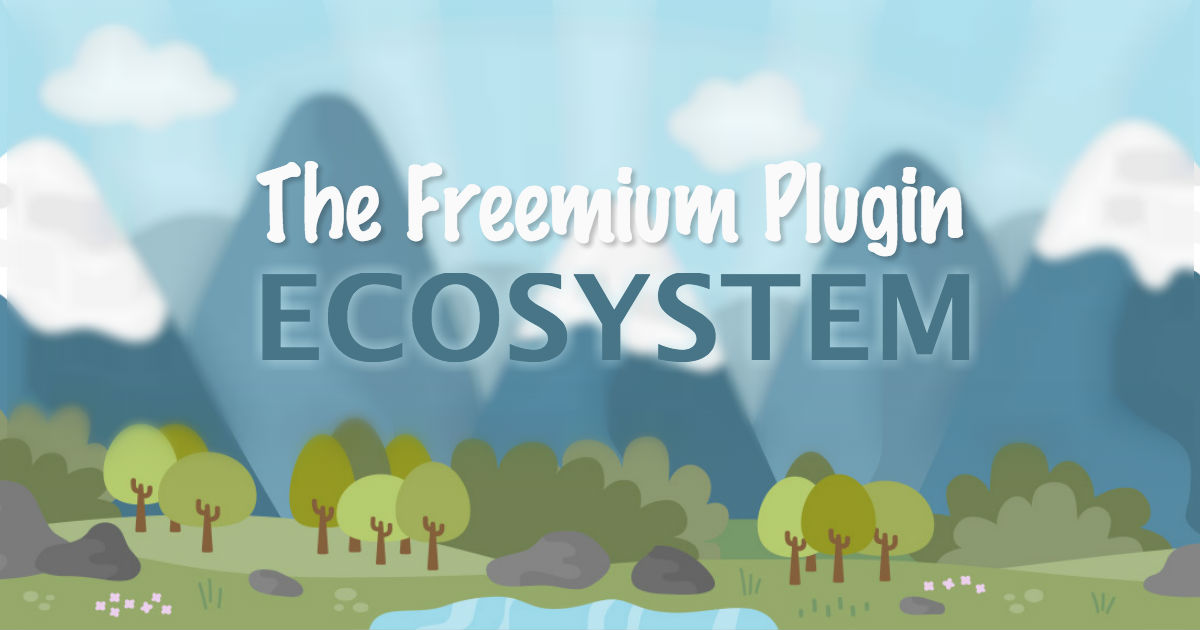 “The Freemium Plugin Ecosystem” is a series of articles on the relationship between freemium plugin authors and the general WordPress marketplace.

When the Founder of WordPress says that freemium plugins can be a bad user experience, those who make their living that way shudder. This happened recently at WordCamp U.S. and we decided to dig deeper into this issue by reaching out to those for whom this statement matters the most: Freemium Plugin Authors like ourselves.

Before we jump in, let’s set the stage:

This past year, WordCamp San Francisco evolved for the first time into WordCamp US. But the “State of the Word” and townhall Q&A tradition lived on — which is excellent. During the Q&A, Jason Lemieux (Founder at Transitive, Inc, creators of Postmatic) asked Matt Mullenweg about policy for hosting the wordpress.org Plugin Directory, particularly as it concerns premium plugins or freemium plugins. Here’s the question: (1:30:33 mark).

Matt Mullenweg: State of the Word 2015

Celebrates the accomplishments of the last year, and look forward to more good things to come as Matt Mullenweg delivers the “State of the Word” from WordCamp US 2015.

Here’s the transcript of that exchange:

“Hi. I’m Jason from Vermont. I make Postmatic. As WordPress grows beyond 25% and with the REST API the amount of interesting things that we could do with WordPress grows as well. Increasingly, WordPress is going to be touching many more parts of the Global Economy in a real way. There’s a really big potential ecosystem there. Given that, developing and maintaining captivating plugins is becoming very expensive. Do you see any modifications to the dot org repo in regard to tools for businesses or policy changes to make a more freemium or premium plugin ecosystem more available?”

“Not so much.” {giggle and audience laugh}

Jason followed up with, “And what was your position on where freemium plugins should be?”

“So, I think that it can be a bad user experience when everything you search for or click on — all the best loading stuff in the directory be that the theme or plugin directory — are kind of “gotchas.” You know? They have sort of a free, light version that does some of what they said they did but eventually are just driving you to a paid version.

“So, I think that’s the thing we just need to be cognisant of that perhaps doing something to promote paid plugins there could help some of those plugins in the short term but I think it would be at the long-term detriment of the WordPress ecosystem to have those.

“Because we can see sort of a parallel universe example of this in the Joomla world where they went pretty hard-core into paid everything and the sort of dynamics that created in their community ended up being pretty corrosive. And people stopped working together as much. They all wanted to make sort of their own paid thing. Users felt like they were being nickeled and dimed for every single functionality. Core development, for them, became a lot lighter because all of a sudden, people contributing to development wanted to put their thing into their plugin that they charge for not into Core.

“So, I think that very much the WordPress.org community and WordPress as a system is still going to be oriented towards the collaborative nature. It’s when we come together like Wikipedia or WordPress itself. People building things to be open and free for the world because that’s how we realize our mission of democratizing publishing. And businesses will figure out how to make money around that. But it’s not something that we want to super create like a marketplace or something like on WordPress.org.”

Why does this matter?

Was Jason surprised at Matt Mullenweg’s response to his question? The short answer is: No.

As a WordPress development company who uses the freemium model for some of our best plugins, we feel invested. But we’re not alone. To get more details from those who have “skin in the game,” Matt Cromwell invited several freemium plugin authors to a roundtable on Blab. Along with Matt Cromwell were Jason Lemieux from Postmatic, Adam Warner from FooPlugins, and Jason Coleman from Paid Memberships Pro.

Matt Cromwell set the stage for the conversation around three main things that Mullenweg raised in his response to Jason Lemieux:

What do think of his comment that freemium plugins in general can provide a bad user experience?

“The thinking that freemium provides a bad user experience out of the box I don’t think is correct. At least, I don’t agree with that. I agree it certainly can happen and it does happen but I don’t think it’s fair to lump them all in together.”

“It goes without saying that there’s plenty of free plugins which offer a bad user experience because they’re underfunded and abandoned. And that’s probably really, really common in the Repo. The user experience that Matt was more specifically talking about, I would guess, would be the upsell and the experience of the actual plugin not being what was advertised unless you pay some money.”

“I think it’s interesting to note and is often noted that Automattic, where Matt’s CEO, has like three of the top ten freemium-style plugins. Even one of them, Akismet, is bundled into WordPress and, so like these kind of things have been hashed before… In general, as a commercial plugin author I feel like Automattic and Matt are our allies in this… we have similar goals.”

“I think it’s probably well-worth saying that I, for one, am so thankful that freemium plugins are even allowed in the repo in the first place. I think the team has done a really great job of defining guidelines for how you advertise your upsells, making sure it’s not overly spammy, overly riddled with ads… And you have to ride the line between providing enough value and usability to make it something that people want, get good reviews, make it just usable but then also making enough revenue to support all the time spent providing free plugins and the add-ons.”

“We each have a different take on the freemium model. I think it’s important to remember that freemium can mean a lot of things. In my mind, when Matt was saying that businesses will think of ways to deal with this, I was thinking of the model where the plugin is totally free but documentation and support are for a charge. That’s the real cost to the company. How are we going to fund the time spent?”

“We were able to develop Paid Memberships Pro and kind of get market share because it was, you know, free in the repository and a really strong plugin. But, actually, as we grew and as we kind of had more demands to maintain like right now the core plugin is large and there’s eighty add-ons for it. And so the maintenance tasks of keeping all those things running require more cash flow than — the support pricing …So, now the plus membership we released this summer, which actually does charge for like we created a system to update our plus add-ons and some other features around the community and stuff for it but basically it’s just given us more revenue and use that to like hire the developers that are needed to maintain a plugin that’s this large.”

“The thing I like about the freemium model is the 80/20 rule. The core plugin should include the 80% of those features. How is Joomla divisiveness relevant to our model? Are we jeopardizing it with monetization?”

“I think that there’s a middle ground here between fully commercial WordPress stuff and a dot org marketplace and some accommodations for people to make a living.”

“I don’t know the exact answer but every time I think about it, I think it just needs to happen. I think it’s inevitable. I think someone’s going to come in, create a marketplace for premium or freemium plugins and they’re gonna succeed however it’s done.”

“I asked that question because I am concerned. I don’t want to see the repo become a graveyard in two years. You know, with the complexity of plugins, and the opportunities we have as developers… we’re building applications and if WordPress is moving … into an application platform, you can’t host applications on the dot org repo. It’s just not gonna happen.”

“There’s things we do for commercial plugins that also helps small plugins. So, for instance, my struggles with the repository a lot have to do with the review system and the support system, you know, and how being a large, complex commercial plugin where not all the code is in the repository, it kind of attracts one-star, negative reviews that we have to deal with… Because there’s a set of expectations the way things are organized that [our shop] should be providing support in the forums and is that really the case? Maybe we should, you know, offer options.”

“It’s ironic that this weekend, GoDaddy announced a big plugin partnership program, and they have this big list of the most popular 100 plugins on their sites. Supporting premium plugins could mean lots of things — not just a marketplace.”

“It really comes down to tools that are available on dot org to plugin authors. right? So, perhaps there’s deeper analytics. Perhaps there’s some kind of a support system that isn’t just the forum that exists now. Perhaps it’s something that can be more integrated into your own site, your plugin itself, there’s lots of other tools out there that do that.”

“I think Matt M. said here’s the future of WordPress dot org, here’s the server software, which is more like what we have now, and here’s the front-end software, which might be an application similar to how Calypso integrates into WordPress.com. …We understand what themes are and they have things in the repository that are React-based or Javascript-based… It has a different set of expectations of what it is and what it does and how it’s used and stuff like that. Maybe it becomes another silo.”

“The last issue that Matt touched on is a little bit difficult to parse. He basically brought up open source collaboration. It seemed to suggest that premium plugins, while they may be licensed with GPL, are not publicly hosted. We gate the access with payment. It’s perfectly legal and right within GPL. Premium plugins are valuable because of support and plugin updates while the code itself is free. He seemed to imply that premium plugins don’t fully embrace the spirit of Open Source.”

“I remember when I came across my first premium plugin that used this model which was Gravity Forms. …My mind has shifted a lot since then… I was appalled when I first came across it and I understand where he’s coming from and I think that maybe to a degree having your premium plugins not necessarily available on GitHub maybe squanders open source development a little bit but if somebody wanted the code they could just ask and I’m sure you’d give it to them, too.”

“I think any friction you remove from collaboration, you know, results in a better product. …And I think there’s been many plugins with kind of an add-on model [have their code completely open on GitHub]. I’ve seen blog posts where it hasn’t affected sales. …They want all of these non-code things that we bundle it up in.”

What to Look Forward to

In the next series of posts we’ll go into more detail about some of the history behind the friction between Automattic and the WordPress Core Team and plugin authors. We’ll also hear from a lot more freemium plugin developers and WordPress professionals on their thoughts on this subject.

For now, what’s your take? We’d love to hear it.