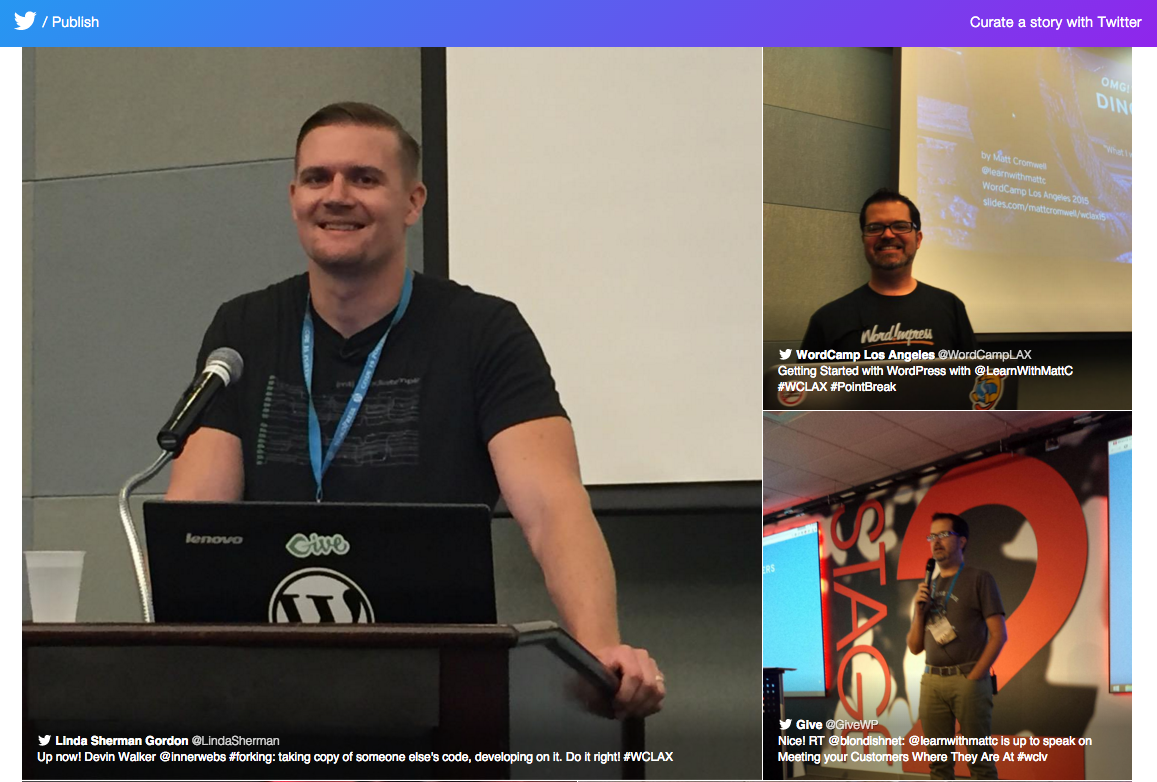 WordPress — it’s all about the community, right? Just like the premise of the movie “Four Weddings and A Funeral,” a group of friends move through life and their stories are told through four weddings and — guess what? — a funeral.

For us, 2015 is FIVE WordCamps and a plugin. It’s been quite the year.

We thought we’d use Twitter’s new Publish tool to highlight a few photo tweets summarizing this year. Brief recaps are below.

We were excited to represent WordImpress at San Diego as sponsors, speakers, and organizers. It’s great to be able to sponsor, volunteer, speak as well as attend a WordCamp. There’s something for everyone.

This was also the first WordCamp where we presented Give. Give hadn’t even been released yet, and still we had hundreds of people express interest in it.

Matt spoke on Properly Setting Up Your Site on Saturday, and co-led the “Plugin Development Bootcamp” on Sunday.

plugin development bootcamp – this track was seriously made for me #wcsd15

@learnwithmattc @yaronguez Thanks for a great plugin bootcamp today at #WCSD15

Matt broke down how to optimize your WordPress site by optimizing your images — before you upload them. Check out the slides and the whole presentation is available on WordPress.tv.

In addition to chatting up people and enjoying the sessions, Devin spent some quality time at the beach. Hey. It’s no joke. The creative mind needs some serious downtime, too. Where are you inspired?

If you are going to #wcmia and don't hit the beach you're missing out… #beachpress pic.twitter.com/3QovQO9uDq

Shoeless Joe would be proud because Devin broke it down in his talk “If You Build It (Right), They Will Come – Creating truly valuable WordPress products and services” You can check out the slides here.

I really enjoyed this talk on #wordpress multi-site at #WCLV #wclv2015 https://t.co/gbxbBU1bch

If customer service isn’t your thing and hand-holding is too much to ask, then Matt suggests you not get into product development. If you’re going to have products, you’ve got to support them well and extensively. Check out his slides here.

Are you your clients place of pain or excitement #wclv #wclv2015 @learnwithmattc pic.twitter.com/uSinN2tNo4

We sponsored this event as well as presented.

Devin discussed how to “Fork it Right” and gave some great detail and history to how we developed Give.  Key takeaways were preserving attribution and fiduciary responsibility — meaning don’t charge for something that was originally free. The slides are here and it’s featured on WordPress.tv here.

Awesome to hear @innerwebs give the story of why he used forking to make http://t.co/pIQQxqqc83. #wclax pic.twitter.com/fkyA7rpzXe

Matt discussed how to get started with WordPress right by talking about Jurassic Park. Just because you CAN make dinosaurs doesn’t mean you should. WordPress is a great tool but remembering function versus form will help you go a long way. His slides are here, WordPress.tv is here.

"Working with http://t.co/8BsXoSzgMS themes is the best way to stay safe and learn a lot" –@learnwithmattc #WCLAX

We were so stoked to have entered and won First Place in WordCamp Orange County’s inaugural Plugin-a-Paolooza for WP Rollback, a plugin we developed just for this contest.

Congratulations to @innerwebs for winning the #wcoc #pluginpalooza WPRollback is awesome and necessary! Thank you!

It was a good challenge to create a plugin just for a WordCamp, present, and then win. But not just that. We loved hearing everyone’s innovations, too. It’s amazing to see an idea executed well, especially when they’re our friends.

Since then we’ve actually learned a lot more about this plugin we created. It turns out that WP Rollback is a great way to do beta testing. And it might just be one of the reasons the whole Universe was created — according to this hilarious reviewer at least.

Last but in no way least: WordCamp US

WordCamp US had over 1,800 attendees, not including the livestream folks. This national conference was hosted in Philidelphia and will be again in 2016. Cities apply to host WordCamp US and the chosen city hosts for two years straight.The dates for 2016 have already been announced and tickets are for sale.

We opened ticket sales for next year’s WordCamp US. December 2-4 2016 at Philadelphia Convention Center. Join us? https://t.co/DRGW8bcWUy

Some of our personal highlights were meeting so many of you and we thoroughly enjoyed the Give Dinner Friday night which Media Temple helped sponsor.

Devin & Matt of @WordImpress are sporting their #GiveSwag at #WCUS.

Say hi if you're there. pic.twitter.com/LtZ3m9E9gf

There were so many great presentations (and hundreds of tweets) making it impossible to list them all here. But thanks to our brilliant Marketing Manager Bridget, we had a strong online presence the whole weekend (Matt is adding this part, of course).

This was our top tweet from the lighting talks in Kite and Key. As a culture, we are innovators.

"Innovation is the core fabric of our culture." @rclations #WCUS #IoT pic.twitter.com/xtRXzXcHx4

We we especially enjoyed the SciFi analogy by Morten Rand-Hendriksen explaining Git.

"Git is not a development tool — it's science fiction." @mor10 #WCUS

"If you're doing any kind of programming, this is usually where things go wrong." @mor10 #WCUS pic.twitter.com/v4G08osUWV

"All you have to do is jump into space, find the overlap, and fix it." @mor10 #WCUS pic.twitter.com/3TqlO8uSgi

Of course, Saturday closed with the annual State of the Word by Matt Mullenweg. It was inspiring to hear the growth of WordPress, WordCamps, and in particular the attendance rates for local WordPress meetups.

"This the largest #WordCamp ever in the world. You are part of history here." @PhotoMatt #WCUS #SOTW pic.twitter.com/qU9zfj7u4a

For the first time he gave us homework: “Learn JavaScript, deeply.”

It’s important to note that the City of Philadelphia made December 5, 2015 “WordPress Day.” Although, it’s not an annual event, it shows that WordPress as a brand is being recognized as it should.

Besides WordCamps we’re also really proud of these things in 2015:

While 2015 was amazing and by far the best year for our organization, we are expecting 2016 to far exceed it. Here’s just a few things you can look forward to:

What WordCamps did you attend this year? Which talks inspired you? What will you do in 2016: attend a meetup, apply to speak, or travel to a new WordCamp?