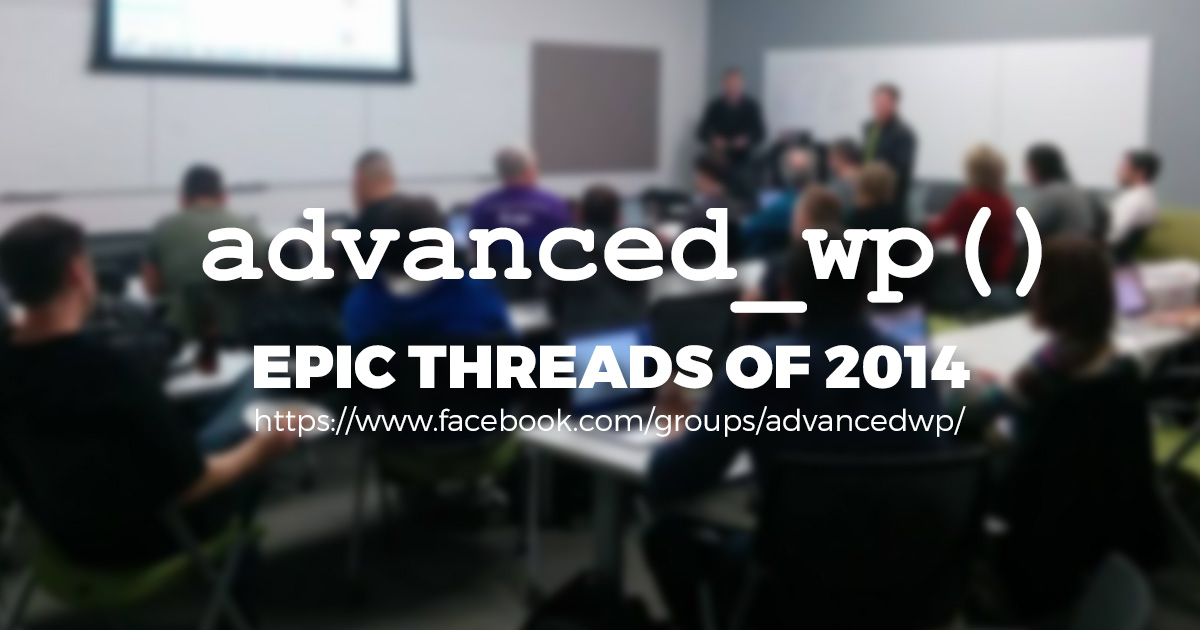 Devin Walker and I have the privilege of being 2 of the 25 Administrators for a Facebook Group called Advanced WordPress (AWP for short). It started as just a simple place for local San Diego WordPress developers to chat online about stuff they were doing, and an online extension of our local Meetup started by Michael Bastos. But over the past 3 years now, it’s grown into a diverse, global, dynamic online presence boasting over 11,500 members.

If you’re interested in Advanced WordPress topics and are on Facebook regularly, head over to our group and request to be added. You’ll enjoy it.

This past year in particular saw an immense rate of growth. But more than just mere numbers, there were some real highlights that stand out as significant not just for us as a group, but even for the broader WordPress community as a whole. So I wanted to highlight some of those moments and make some projections for 2015 as well. Without further adieu…

The One Where WPTavern Polled the Group for an Article

AWP Thread Link (because the group is “Closed” only members can see the threads. I’m posting here mostly for our members to be able to reminisce) 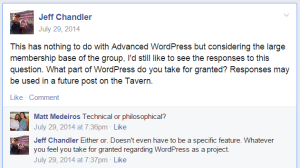 In early 2014 Jeff Chandler, of WPTavern, joined AWP. He was a lurker for quite some time. But slowly he started chiming in and contributing questions. His first major foray with us came with this question:

“What part of WordPress do you take for granted?”

It is an interesting question and provoked a pretty interesting discussion. A few responses were:

The end result was this excellent article here. 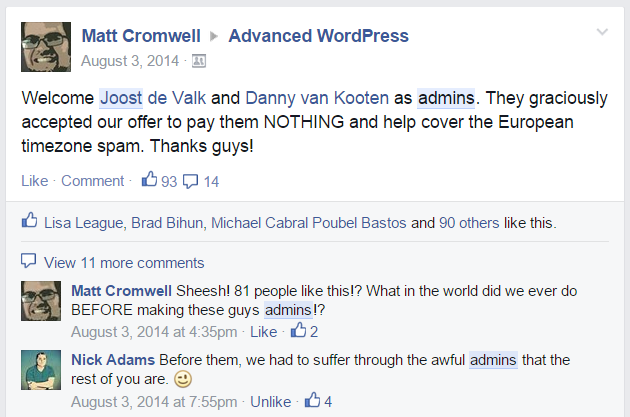 It was a banner year for growth. But for a small group of volunteer admins, growth means growing pains. We were getting regular bouts of spam, and since almost all of our admins going into 2014 were from the US (with the exception of the awesome Hristo Pandjarov from Siteground in Bulgaria), we were getting overrun with spam in the late evening US hours. Hristo couldn’t even contribute, all he could do was delete Ray Ban posts!

But it really says something about the group when we asked Joost de Valk — creator and founder of one of the most popular WordPress plugins on the Repo: WordPress SEO by Yoast — to become and admin and he says: Yes! And add my employee Danny van Kooten too!

I hate to brag… because I really can’t in this kind of company, but if you look only at the Job Titles of the admins you can see the caliber of this group:

Not to mention several other really stellar freelancers and a couple guys who are doing awesome stuff at WordImpress.

The One Where We Got Featured in WPTAVERN

AKA: The thing the launched us past 10,000 members 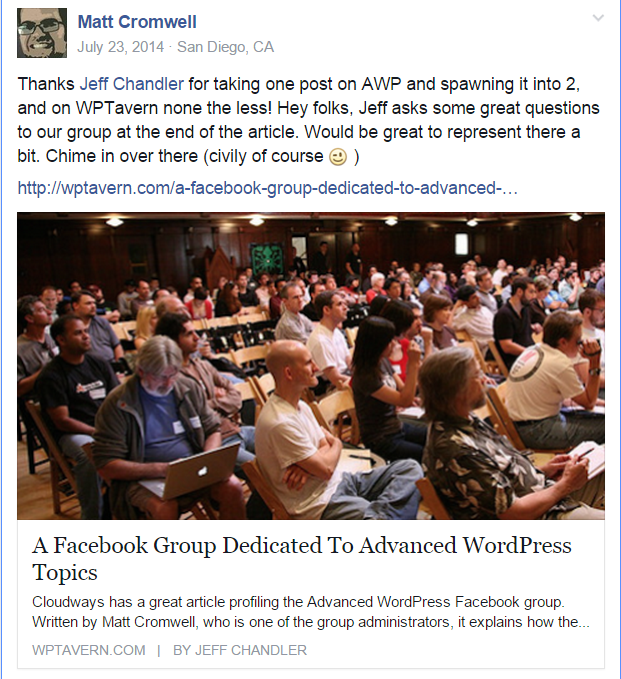 In July of 2014, Jeff Chandler of WPTavern wrote up an article highlighting our group. It was in response to an article I wrote for Cloudways Hosting about the history and purpose of AWP (both are good reads by the way). Jeff highlighted the success of the group, but also mentioned frustrations with having advanced topics discussed on the Facebook Groups platform. All AWPers immediately understood and sypathized with his criticism. Facebook really isn’t ideal for serious discussion — it’s not threaded, you can’t link between articles well, the search is really horrible.

Nevertheless, Chandler’s article provoked a really lively discussion at WPTavern about the group and Facebook as a platform. It also put us in a much broader spotlight which rocketed our membership numbers quickly. It took 2.5 years to get to 7,500 members, but only 2 more months to surpass 10k!

Online relationships are really great. I’ve been amazed at how well I’ve gotten to know folks all over the world through AWP without ever having met face to face. But meeting face to face is also just priceless. That’s why this year at WordCamp San Francisco, it was imparitive that we get a groupie photo.

This year was also a lot of ups and downs in terms of WordPress news. There were several really big plugin vulnerabilities that ruined thousands of sites around the world over night. One of the big ones was the MailPoet vulnerability. Our members simply are not too kind to plugins that screw up, so once the news was out and a few members were hit, they immediately took to the forum and lit up MailPoet like it was the spawn of Satan.

Part of our growing pains has also been that even though our group is “closed” (meaning our posts aren’t public unless you’re a member), we get tons of membership requests daily. And in those requests are occasionally heads of marketing, lead developers, or sometimes even the founder of MailPoet himself: Kim Gjerstad.

The matter was more complicated because the reason everyone knew about the vulnerability was because of an announcement by Tony Perez on the Sucuri website. Well, at the time Tony happen to be a member of the group as well. So once conversation started bubbling, both Kim and Tony were able to “clear the air” with each other. Throw in a couple of our more volatile members as well and the conversation was … epic.

Truthfully though, it was actually a really constructive conversation about the nature of responsible disclosure. The crux of MailPoet’s gripe was that the whole problem wouldn’t have been so bad if Sucuri wouldn’t have published their article. Sucuri’s response was basically that they alerted MailPoet to the vulnerability, and after MailPoet pushed an update that only half-fixed the problem and didn’t alert their customers to the urgency for updating, Sucuri felt obligated to publish the article.

Our group is really good at being a sounding board, troubleshooting the craziest stuff, and even just telling you to take a breath and relax. In this case, W3TC (one of the most popular caching plugins on the WordPress Repository) had just released their Pro service. One of our members, Brad Griffin, jumped at the chance to have the pro’s fully optimize his very media-heavy site. When weeks and weeks went by, payment made in full, and little to no communication from the W3TC team, Brad turned to AWP for advice.

In this case, Brad knew he was in full gripe mode, and it seemed like legitimately so. But he went out of his way to invite the folks at W3TC to join the group so they could reply to all the comments going on about their performance to date.

In the end, Brad got the service he paid for and saw really serious results. His experience was less than satisfying, but the hope is that the added attention his case got because of AWP helped the folks at W3TC kick it into high gear and hopefully their service is much better for it today. In the end, Brad wrote a very generous review about their service.

The One Where Leadership at Sidekick and GoDaddy Apologized Profusely

This one was pretty recent, and in the broader world of web development and WordPress it was maybe a hiccup. But for those who had clients hosted on GoDaddy, one day they woke up and logged in and saw a weird orange ninja staring at them from their WordPress Dashboard. In the words of the post author:

WTF is that?! Have I just been hacked? There’s no way I’m clicking on that without checking WTF it is!?! If that’s legit it’s the strangest worst bit of intrusion I’ve ever seen

Ben Fox, Co-founder and Business Director at Sidekick is a friend of mine. I’ve been vicariously enjoying their success of their major product: Sidekick. I’ve vetted designs with them, spell-checked posts, beta tested everything they could throw at me. From everything I’ve seen and learned about what they do, they’ve earned serious kudos. Their product is now providing support for WPEngine users, and now GoDaddy users as well. But as soon as I read that post in AWP, I knew there was a problem. Somehow, the product team at GoDaddy had force-installed sidekick on all WordPress installs overnight. Our AWP folks were really upset, with good reason.

The thing is, Ben knew they had good reason too. So did the folks at GoDaddy. So suddenly, this lonely thread in AWP had the folks at Sidekick and top team leaders at GoDaddy chiming in and apologizing for an obvious miss-step. Ben and Mendell Kurland (WordPress Evangelist at GoDaddy) stepped in and had the utmost respect, patience, and clarity in the middle of some serious backlash. Ben wrote up a really great piece summarizing the issue and their response to the comments in AWP.

To me, that’s the power of groups like this. The fact that the ears of powerful businesses bend our way and actually listen and respond QUICKLY to the situation is really amazing. It’s a testimony to those organizations as well as to the significance of our group.

The One Where We Surpassed 10,000 Members 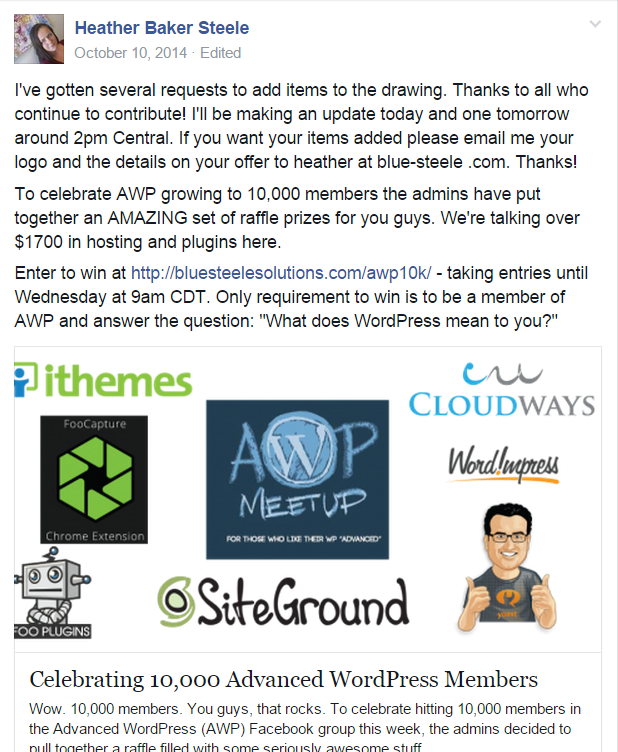 Surpassing 10,000 members really is Epic. It was a really big milestone for us. So we put our heads together and decided to do a serious celebration by organizing a HUGE plugin, hosting, theme package Giveaway. Heather Baker Steele of Blue Steele Solutions organized it and pulled it off with pizzaz. She simply asked entries to be a member of AWP and answer the question:

“What does WordPress mean to you?”

Heather posted the results of that poll on her site and combined it all with a really great interview about organizing WordCamp’s with Carrie Dills as host.

Last but not least: Matt Mullenweg became a member of AWP. I wrote about this in detail on my site when it happened, but needless to say, when I first was conceptualizing this post this was the event that came to mind first. It’s like an Apple group greeting Steve Jobs, or a Rock ‘n Roll group greeting Bruce Springsteen or Steppenwolf to their group. It’s the definition of EPIC.

Mullenweg was really a class act. He tagged each person who asked constructive questions and replied to them with candor and detail. He spoke his mind and defended some things that some of our folks like to diss (particularly Jetpack for some reason). I’m writing this post so I get to be biased and highlight my favorite moment. Of course it was when he answered my ridiculous question:

The follow-up to this is that he’s chimed in on at least one other thread in our group since his 209 reply thread. He seems to notice when we talk about either Jetpack or the recent partnership with BruteProtect. Needless to say, this resulted in a post at Cloudways, and at WPTavern as well.

What’s Next for AWP?

Honestly, it’s hard to say. If you would have asked me about 2014 I never would have guessed half of these items. It surprises me everytime how this community creates such interesting dialogue and discussions and debates.

But I can say we’ve had very regular discussions about the nature of the group itself over the past few years and 2014 was no exception. The name itself seems to cause confusion or lack clarity. Some are attracted to the group expecting seriously “Advanced” material. Others come to the group because they are learning and wanting to become advanced. Others see “Advanced” and think: “Perfect, I’ll go ask the experts how to fix all my problems.” With 11k+ members now, it’s hard to conceive of this group as having any kind of central identity.

But as I was combing through all these posts and laughing and pondering over all the threads for this article, a few things stood out to me:

So I don’t think I can make predictions for 2015. But I can determine my own intentions for how I contribute to the group in 2015.

I think whatever might come our way in 2015, if we go about it with these kinds of intentions, it’ll be EPIC no matter what.

16 thoughts on “Epic Posts of Advanced WordPress in 2014”