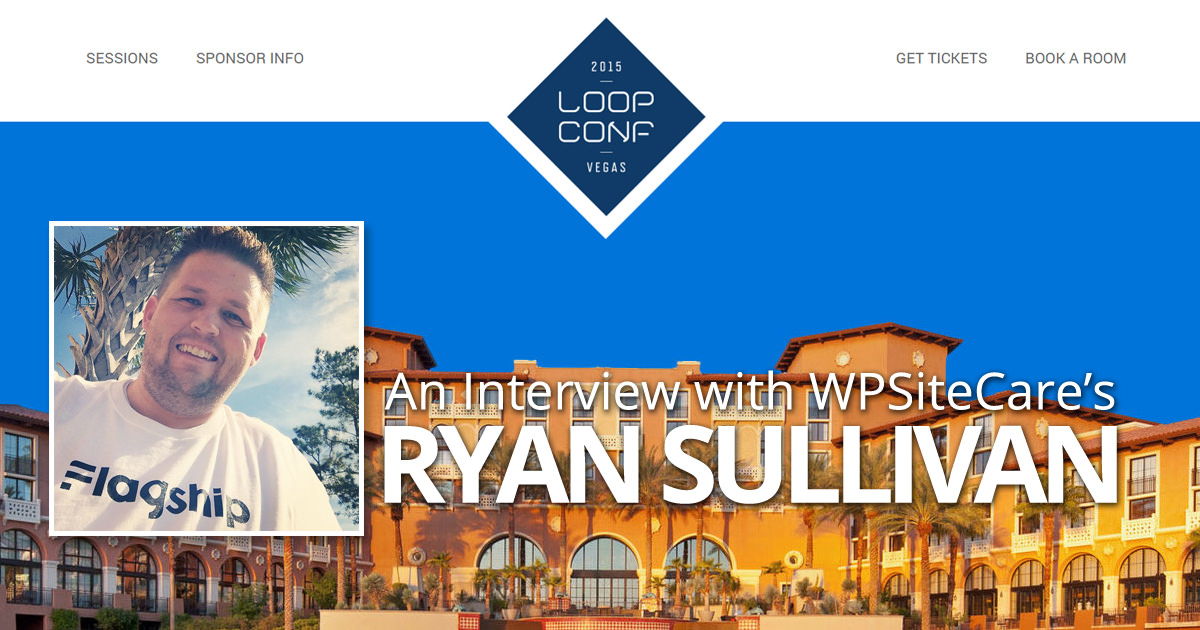 Ryan is a genuinely good guy, and I don’t say that lightly. He runs a site called WPSiteCare which focuses on all the customer related stuff that are often the nightmares of every freelancers existence. In the realms of patience and clarity and thoughtfulness, Ryan and his team come out in spades.

I met Ryan in 2013 at WordCamp LAX. At that time WPSiteCare was just starting to pick up steam and I hadn’t even heard about it at all. Now, in the WordPress ecosphere, it’s a household name. At the same time that he’s been setting WPSiteCare apart from all others he also launched FlagshipWP and partnered with Rob Neu to create Compass, which is the most robust and well-thoughtout WordPress starter theme I’ve come across.

In the middle of all of that, Ryan is now also launching a bold and daring new WordPress focused conference: LoopConf.

LoopConf is focused on WordPress Developers and Agencies. And though it promises top-notch WordPress speakers, the like that one would often see at WordCamps, it is not a WordCamp. At any one given WordCamp you might have 2 or 3 of these highly sought-after speakers, but at LoopConf you get them all. It’s honestly quite an impressive list, and it’s not complete yet.

But the thing that has gotten a lot of attention most recently is the price point. At $800 a pop, LoopConf just positioned itself to be a highly exclusive event. Compared to a typical WordCamp, which typically run $45 a ticket, LoopConf is a far cry from what WordPress developers have come to expect. Naturally, comparisons with PressNomics and PrestigeConf are in order. So what is going to separate LoopConf from the others, and what is going to make it worth almost 20 times what you would pay for a WordCamp?

Luckily, I had the pleasure of interviewing Ryan to find out.

From everything I’ve read, and particularly after my chat with Ryan, at this point I would say that I am cautiously optimistic about this new conference. Earlybird tickets went on sale this past Thursday and sold out within 24 hours. It has a lot of strengths, but each strength also has subtle reasons for concern as well. Here’s my run-down.

UPDATE: Make sure to see Ryan’s comments below, he’s addressed each of my concerns directly there.

Strengths:    LoopConf has done a great job of raising expectations very high. The website and the communication about it, and even the “drama” surrounding the pricing all have generated a sense of anticipation that is really positive. I’ve also chatted with a few of the speakers and each of them are really excited about it and have nothing but positive things to say.

Concerns:    And yet, when you go to the website, there is not a clear and well defined purpose given for the Conference.

“The Greatest Conference Ever Created for WordPress Developers”

“The Conference for those that Power the WordPress Economy”

“A Premier Business and Development Conference”

To me, simply saying your the best conference ever really doesn’t tell me much except that you want me to believe that. The speaker list is one of the best line-ups I’ve seen, but anyone who’s ever attended a WordCamp knows that the presentations are only half (or even less) of the real benefit of being there. Naturally though, the speakers who are there are not just speaking and taking off. They’re going to be outside of their sessions mingling and chatting and those conversations alone will be amazing. Still, the lack of clear focus or purpose statement is less than encouraging. Granted, it’s still a work in progress, so maybe this is simply a “feature request” and not a “bug”. Again, I’m cautiously optimistic.

Creating an Environment for Awesome

Strengths:    The venue and the sheer amount of time allotted to the conference combined with the caliber of the folks speaking and attending really does set this up to be all the things WordPress developers want packed into the smallest amount of time possible. I mean, how much could you possibly grow in your business if you happened to sit on a couch between Pippin Williamson (EDD), John O’Nolan (Founder of Ghost), and Jack Spurlock (Engineer and Wired.com)? That’s kind of incredible.

Concerns:    At the same time that this allows for a random couch-sitting session like that to happen, the very idea of this conference can produce the exact opposite result. WordCamps and Automattic itself are famous for their flat approach to leadership and hierarchy. Another way to think about it is that the Open Source nature of WordPress and WordCamps is a check against making the WordPress community into a professional “who’s who”. I’m always amazed when I meet folks that I’ve always only known online at a WordCamp and we strike up casual and genuine conversation that pulls down all the facade of celebrity. What happens when those who attend these premier conferences start de-valuing WordCamps in general? Or what happens to those small WordPress shops that decide to spend the money to be at the Conference, but get the cold shoulder in the hallways outside the presentations? This could happen at any conference, but LoopConf’s ticket price itself might encourage that rather than inhibit it.

Strengths:    Ryan mentioned several times in the interview that one of the goals of LoopConf is to help boost the reputation of WordPress in the eyes of the general Tech community. Having elite conferences like LoopConf can do that, it can attract businesses who see conferences like this as a valuable business expense to send their employees to. Further, getting all these people together in the same room for three days might just produce some really awesome ideas that can help push WordPress much further, especially considering how many Automatticians are on the speakers list.

Concerns:    But at what expense? Why does the general tech community look down their noses at WordPress sometimes? Is it because of a lack of conferences? Not really. Self-proclaimed “Open Source Pragmatist” and former WordPress developer Scribu recently posted his reasons for leaving WordPress and they have nothing to do with conferences. On the contrary, what he says he’ll miss the most is the WP Community (which by extension probably means WordCamps). How does having a high-profile, exotic, and high-ticket event enhance the reputation of WordPress? Personally, I believe that the biggest reason WordPress has become so globally and massively popular is because of it’s transparency and accessibility — and I mean that from code to community, bottom to top. Matt Mullenweg has done an amazing job at permeating everything about WordPress with his strong beliefs in flat leadership, transparency, and Open Source everything. How will this event embrace and enhance that? I’m not really sure.

The real bottom line is that I like Ryan and I trust him. I don’t know the others on the team who started the AngularJS Conference, but their experience and skills are probably the single most significant asset to the success of LoopConf so far. I like that they requested speaker submissions rather than picking and choosing. I like that Ryan has been very receptive to the idea of scholarships and the “Five for the Future” campaign. And I absolutely and thrilled about the speakers list to date. All of those things are strong causes for optimism and excitement.

Further, I really think each of my concerns above are addressable and potentially surmountable. I’d love to see LoopConf succeed, and I think it has the potential to really become an agent for progress and change in the WordPress eco-sphere and community. I just really, really don’t want my concerns to flesh out into realities. Let’s hope and work towards the best instead.

One thought on “Cautious Optimism for LoopConf: Interview with Ryan Sullivan”