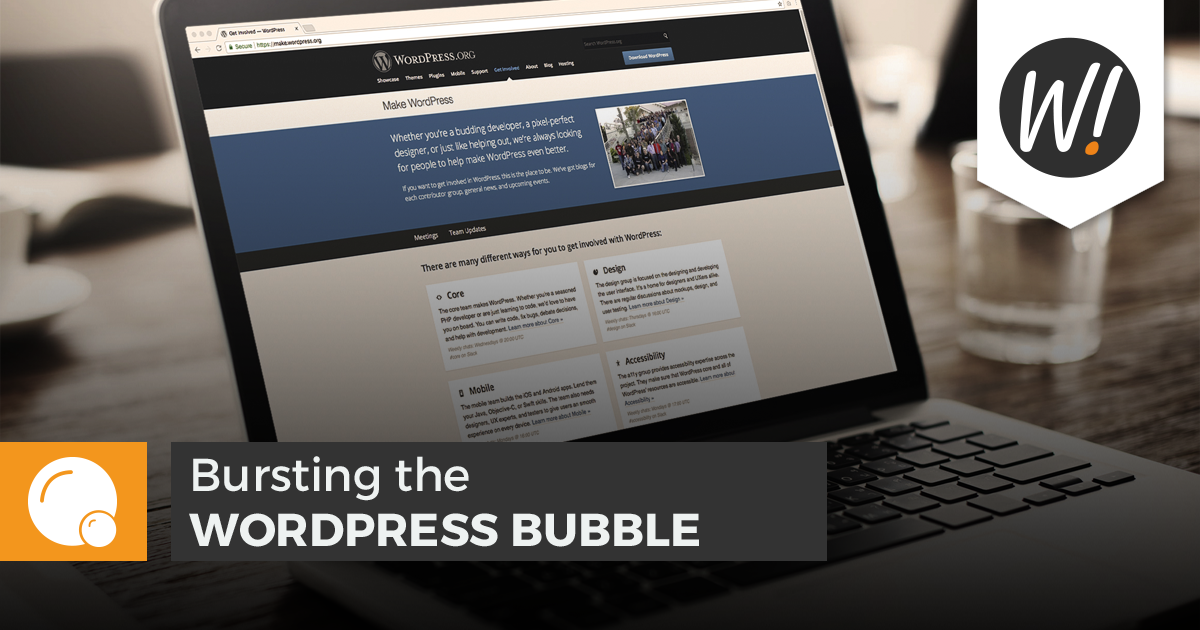 As WordPress modernizes in an increasingly competitive landscape, its community is taking new initiatives that challenge the notion of a WordPress bubble.

One day when archaeologists dig up the digital remains of the WordPress civilization, they will find the remnants of a global community that both influenced and embraced the world around it. History will tell of a people rooted in a wide range of skills, trades, and locations. Their tools will reveal influences from the libraries of surrounding communities and the open-minded developers who adapted them for a common cause.

On the whole, historians will conclude that this imperfect civilization at times let its pride get the best of it, but ultimately succeeded in its goal to Democratize Publishing. One footnote that will not go down in history as a defining feature is any sort of bubble.

What is the WordPress Bubble?

The concept of an isolated community of WordPress professionals unconcerned with the outside world is a talking point often referenced when criticizing the WordPress ecosystem. To be fair, the criticism is not entirely unfounded.

For example, Scott Bolinger recently travelled to a conference outside the WordPress community and shared valuable insight that can only be gathered by leaving one’s comfort zone. The community’s reaction to Scott’s article once again placed the WordPress bubble at the center of the conversation.

Over the past year, I’ve had the opportunity to see this bubble up close and personal as a WordPress professional, WordCamp organizer, speaker, and attendee; and I think it deserves a closer look.

The Bubble is More Complicated Than It Appears

On the surface, it’s understandable that WordPress’ tightknit community and historically slow, iterative approach might be perceived as a lack of awareness. Upon further inspection, however, WordPress reveals itself to be anything but an enclosed echo chamber. In fact, today’s most prominent WordPress initiatives demonstrate that WordPress is not simply tolerating, but embracing influence from the web community at large.

You Did What for a Living?

While WordPress has work to do in terms of improving ethnic and gender diversity, its global user base reflects the platform’s ability to serve all corners of society. As a result, the membership of the WordPress community inherently provides a wide variety of perspectives and opinions. If there is a bubble, it’s much larger than it appears.

Gutenberg From the Outside Looking In

One WordPress project that looks outside the bubble more than any other is Gutenberg. The reimagined editor is at once a radically different experience for WordPress users and obviously recognizable to those familiar with competitors like Medium, Wix, and Squarespace.

Internally, Gutenberg is representative of the type of modern development that is noticeably absent in WordPress core. By considering a change that drastically departs from its past and closely mimics its competition, WordPress leadership is demonstrating a willingness to shape its future from the outside looking in.

The JavaScript Debate Heard Around the World

When Matt Mullenweg first announced that WordPress was parting ways with React, the community erupted in a passionate debate regarding the JavaScript framework of the future. Contributors and maintainers from projects like Vue.js, AngularJS, and even Drupal offered their opinions in this WordPress-centric debate.

In many cases, WordPress developers themselves recounted their experience with a specific framework, which emphasized how involved they are in these communities. With this important decision looming on the horizon, it’s clear that collaborating with and seeking advice from those outside of WordPress is playing a crucial role in determining the framework of the future.

The Community Takes the Lead

Despite the WordPress requirements recommending PHP 7 or greater, WordPress core hangs on to support for a version of the language that reached end of life over six years ago.

While the WordPress core project may appear a bit behind the times, the community is nevertheless taking the lead by bringing WordPress up to date using modern tools and approaches from outside the bubble.

Practices like object-oriented programming (OOP), autoloading, and namespacing are increasingly being adopted into the WordPress landscape. In following developers like Josh Pollock, Carl Alexander, Tonya Mork, Alain Schlesser, and Tom McFarlin, it is clear that their modern approaches to WordPress development did not sprout from the procedural depths of WordPress core.

On the contrary, many of their perspectives are shaped by experience with other PHP frameworks such as Laravel and Symfony, where lessons are learned and then adapted for the WordPress space.

Visit the GitHub repository of Gutenberg or one of your favorite plugins and you are bound to find an assortment of front-end development tools. These tools include preprocessors, postprocessors, linters, bundlers, and compilers that turn new JavaScript into old JavaScript.

Not even the most basic design structure—the grid—is safe within our ever-evolving toolset. As Morten Rand-Hendriksen showed us at WordCamp Europe, CSS Grid changes everything we know about web layouts.

Clearly these tools can be overwhelming and WordPress core has legitimate reasons to steer clear from that rabbit hole for the time being. Still, the growing presence of such tools reflects the fact that the community, if not WordPress itself, is keenly aware of its role in modernizing the web in the years to come.

WordCamps or The Elephant in the Room

A discussion of the WordPress bubble wouldn’t be complete without acknowledging its most commonly referenced topic—WordCamps. These community events are often comprised of repeat speakers and attendees who travel the world several times a year to live, breathe, and celebrate WordPress. At first glance, it appears that WordCamps are the quintessential bubble experience—because that’s exactly what they’re supposed to be.

WordCamp.org bills the event as “a conference that focuses on everything WordPress.” For many attendees, WordCamp is their introduction to the platform. It’s where they expect to learn and hear about WordPress from those most experienced with it.

Could outside speakers offer some much-needed perspective? Yes.

Even with room for improvement, WordCamps in their current form mostly live up to their billing, for better or worse.

Where Does That Leave Us?

At the risk of being labeled a bubble apologist, I must emphasize again that the WordPress community is not infallible here. Rather than fully relying on the WordPress project or its institutions to lead the way, perhaps we as individuals ought to shoulder the responsibility of expanding our own worldviews.

Much like Scott Bollinger broke out of his normal regiment and returned with valuable insight, so, too, should the rest of us make an effort to walk a mile in others’ shoes. Attend a non-WordPress meetup; try a screen reader; install a page builder; talk to a Drupal developer; or sign up for Wix.

“The point is that we don’t hear about this stuff if we are only talking in an echo chamber. We need to pay attention to what other technologies are doing better than WordPress, and acknowledge it. Then learn and get better.”

It’s taken me a long time to let go of the idea that branching out somehow makes me a fraud or robs me of valuable time that could otherwise be put towards development. In reality, it’s the seemingly unexpected conversations that provide us with the type of awareness and empathy that can’t be found in any documentation or handbook.

So get out there and make plans, meet new people, and do your part to burst that bubble. Just don’t forget to check your WordCamp calendar first 😉

7 thoughts on “Bursting the WordPress Bubble”