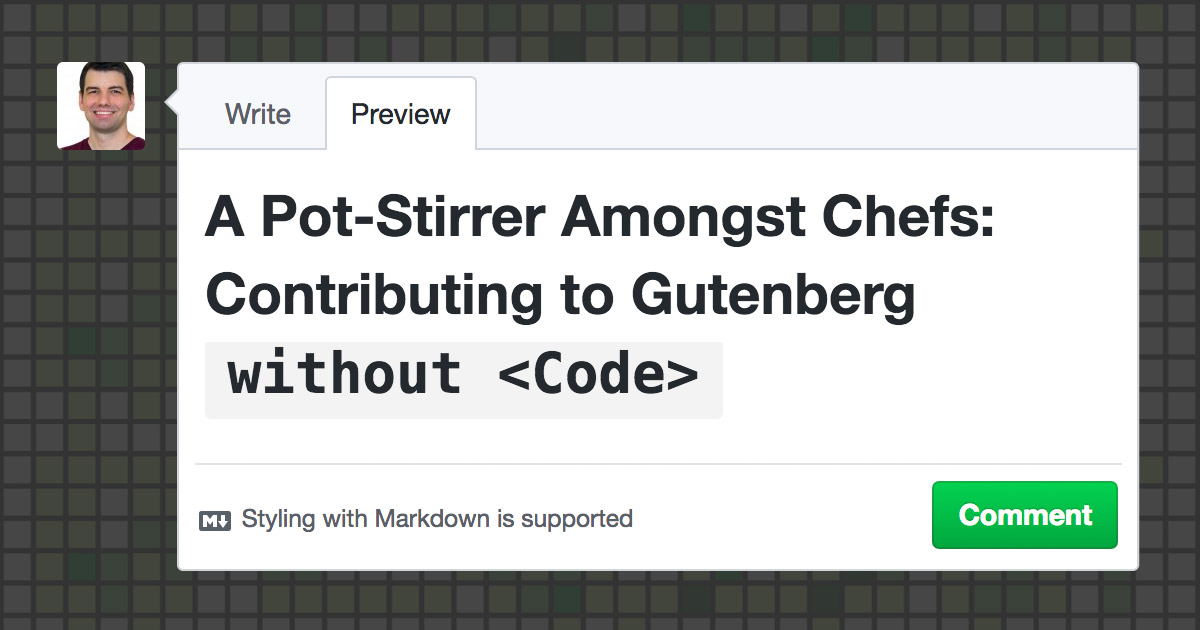 Gutenberg is the future of WordPress, but you don’t need to be a developer to help shape it. So how do you contribute without code?

As a WordPress Engineer and part of the team behind GiveWP, I’ve been closely following the development of the new Gutenberg editor. While I write code in the WordPress ecosystem every day, my contributions to Gutenberg thus far have been decidedly code-free, as I’ve instead focused on testing and leaving feedback in the project’s GitHub repository.

In open-source software, providing feedback without execution is often interpreted as laziness or entitlement, but when done with respect and the right intentions, feedback can be just as valuable as the code that results.

In sports and in many other aspects of life, the concept of affecting change without executing change is accepted without question. Whenever we credit coaches, teachers, or family members for our success, we are acknowledging that their intangible contributions played a vital role in our outcome.

For example, nobody doubts the contributions of Pittsburgh Steelers coach Chuck Noll even though he never played a snap of football during his four Super Bowl-winning seasons. Of course the coach’s strategy, foresight, experience, and motivational ability had a clear impact on the team’s success. He contributed without executing.

Sadly, when it comes to software development, we often limit our definition of contribution strictly to code-related activity. Too often the amount of code committed to large projects like Gutenberg is used to evaluate the worth of an individual. While code contributions are obviously essential to the success of a project, so too are the conceptual contributions that shape how and why the code is written in the first place.

(Not) Representing the Opposition

In a recent conversation about Gutenberg with my friends Matt Cromwell and Josh Pollock, I took on the role of “The Opposition.” I suppose I earned this title when my opposing views on Gutenberg’s meta box support found their way onto WP Tavern. While it’s true that I have strong opinions on the subject, I care much more about the wellbeing of the community — the Humanity of WordPress — that I remember Rich Robinkoff describing at my first-ever WordCamp.

Opposing views provide a necessary system of checks and balances in open-source projects, but the success of this system relies on a spirit of collaboration, not merely criticism. If my feedback has had any impact on the project, then I credit it to a conscious effort to respond passionately while never losing sight of the humanity behind the screen.

The Right to React

Like many developers, I’m still in the process of learning JavaScript deeply, which means I haven’t yet had the opportunity (read: confidence) to commit a pull request to Gutenberg. A lack of time, coding ability, and confidence are common barriers that hold otherwise capable people back from contributing to WordPress every day. It certainly held me back, that is, until I realized that I have more to offer than ones and zeros.

While I can’t always commit code, I can still influence the decision-making process of those executing change. I can lend my experience, my foresight, and my advice to those more capable than I am.

In other words, while I may struggle to write “hello world” in React, I still have the right and responsibility to actually react.

Stirring the Pot with Respect

When contributing to a project without code, it’s important to carefully consider one’s first impression. Be direct, objective, and provide actionable feedback. While you may not be the one to implement the solution, you can still set the wheels in motion.

From the team’s perspective, you may appear as a stranger barging into a project in the middle of development. Remember they’ve put in their time; you haven’t. Keep the following in mind and slowly but surely you’ll begin to settle in with your fellow contributors.

To the Gutenberg Team:

I’ll be the first to admit I haven’t always followed these rules verbatim, but I will—and we as a community should—do better. We should not only contribute, but also defend your contributions when outside criticism crosses the line into vitriol. Again, we’re in this together.

To the WordPress Community:

You have opinions—smart, valid opinions worthy of contribution whether they are accompanied by code or not. I encourage you to speak out when you disagree, endorse ideas when you do agree, and don’t be afraid to be the opposition every once in awhile.

After all, even the most talented chefs need someone to stir the pot.

2 thoughts on “A Pot-Stirrer Amongst Chefs: Contributing to Gutenberg Without Code”